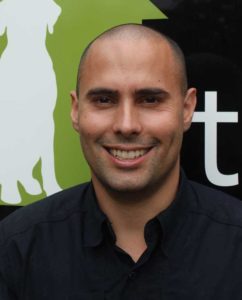 Ben is The House Call Vet’s head veterinarian. Having decided at the age of five that he wanted to be a vet, Ben graduated from the University of Queensland in 2005 with first class honours.

After initially working in general practice, Ben elected to pursue his interest in small animal medicine by undertaking 2 consecutive internships (1 year of emergency medicine and 1 year of internal medicine) at a leading specialist centre in Brisbane’s northern suburbs.

In 2009, Ben attained Membership of the Australian and New Zealand College of Veterinary Scientists, after successfully completing a series of examinations in small animal internal medicine. Ben worked at the University of Queensland Teaching Hospital for several years prior to its closure.

Since then, Ben has been working full time with The House Call Vet. Ben lives in Kenmore with his wife and young son. Together they have several pets including dogs, cats, fish and chickens.

Meet the rest of the team

Follow Me!
Three Great Pet Blogs You Need To Read

Our standard consults allow our vets and nurses up to 30mins with you and your pet. Sometimes however, you may want us to spend a little longer with you. If you have a nervous/shy pet or a pet with multiple health issues, consider requesting an Extended Consult which allows our vet up to 45mins with you instead.

Our standard house calls are booked in time ranges according to which region of Brisbane you live in. Sometimes however, you may want to book a consult at a time when we weren’t planning to be in your area – that’s ok! Our House Call Choice Consults are available between 8am-6pm and allow you to choose a consult time that suits you, regardless of where you live.